Biden to introduce nominee for secretary of defense Wednesday

WASHINGTON (NewsNation Now) — President-elect Joe Biden Wednesday is expected to introduce retired Army Gen. Lloyd Austin as his nominee secretary of defense, amid concern from some in Congress that the Pentagon should be led by a civilian rather than a career officer.

Austin, who would be the country’s first Black secretary of defense, has built a reputation as an intensely private man who avoided the spotlight during a distinguished four-decade career in uniform, including a stint as head of the military’s Central Command, which oversees U.S. troops across the Middle East.

But his nomination could prompt a complicated confirmation process after at least two Democratic senators expressed opposition to waiving a law that requires top military brass to have been out of the armed forces for at least seven years before running the Pentagon.

Pres. Trump hosts ‘Operation Warp Speed Vaccine Summit’ at White House
Biden urged the Senate to waive the law and “swiftly” confirm Austin in an essay published on Tuesday by The Atlantic magazine.

The former vice president praised Austin’s work under pressure, noted the historic nature of his appointment and said Austin shared with him a commitment to using force only as a last resort.

“The fact is, Austin’s many strengths and his intimate knowledge of the Department of Defense and our government are uniquely matched to the challenges and crises we face,” Biden wrote. “He is the person we need in this moment.”

Biden countered the concerns by arguing that Austin knows that a Pentagon chief’s duties are different from those of a military officer.

He said Austin is aware that “the civil-military dynamic has been under great stress these past four years,” an allusion to President Donald Trump’s hiring of numerous retired generals for key posts early in his administration, including retired Marine Gen. Jim Mattis as defense secretary.

Biden picks California AG to be first Latino health secretary
Biden argued that Austin would work to put the civil-military balance “back on track.” He said the main reason he picked Austin was because he reacts well under pressure.

“He is the person we need in this moment,” Biden wrote.

Austin was an unexpected choice. Most speculation centered on Michele Flournoy, an experienced Washington hand and Biden supporter. She would have been the first woman to run the Pentagon. Flournoy issued a statement Tuesday congratulating Austin and calling him a man of deep integrity.

Austin is widely admired for his military service, which includes leading troops in combat in Iraq and Afghanistan and overseeing U.S. military operations throughout the greater Middle East as head of Central Command. But the requirement for a congressional waiver makes getting him installed as Pentagon chief more complicated than usual. Austin retired in 2016 after 41 years in the Army and has never held a political position.

Such a congressional waiver has been granted only twice: in 1950 for George Marshall and in 2017 for Mattis. Some prominent Democrats opposed the Mattis waiver, and among those who voted for it, Sen. Jack Reed of Rhode Island expressed doubts.

US Navy official says ‘uneasy deterrence’ reached with Iran
“Waiving the law should happen no more than once in a generation,” Reed, the ranking Democrat on the Senate Armed Services Committee, said then, adding, “Therefore, I will not support a waiver for future nominees.”

Asked Tuesday about an Austin waiver, Reed seemed open to the possibility.

“I feel, in all fairness, you have to give the opportunity to the nominee to explain himself or herself,” he told reporters.

Sen. James Inhofe, R-Okla., the current chairman of the Armed Services Committee, said he had no problem voting for the waivers. “I always support waivers,” he said. But he said he doesn’t know Austin well.

Civilian control of the military is rooted in Americans’ historic wariness of large standing armies with the power to overthrow the government it is intended to serve. That is why the president is the commander in chief of the armed forces, and it reflects the rationale behind the prohibition against a recently retired military officer serving as defense secretary.

Democratic Sen. Richard Blumenthal of Connecticut said despite the historic nature of the nomination, he would not vote for a waiver because it “would contravene the basic principle that there should be civilian control over a nonpolitical military.”

“That principle is essential to our democracy … I think (it) has to be applied, unfortunately, in this instance,” he said.

Rep. Elissa Slotkin, a Michigan Democrat, said she has mixed feelings, including deep respect for Austin, with whom she worked as a Pentagon official during his years in Iraq and Afghanistan.

“But choosing another recently retired general to serve in a role that is designed for a civilian just feels off,” she said. “The job of secretary of defense is purpose-built to ensure civilian oversight of the military.”

Biden has known Austin at least since the general’s years leading U.S. and coalition troops in Iraq while Biden was vice president. Austin was commander in Baghdad of the Multinational Corps-Iraq in 2008 when Barack Obama was elected president, and he returned to lead troops from 2010 through 2011.

Austin, a 1975 graduate of the U.S. Military Academy at West Point, served in 2012 as the first Black vice chief of staff of the Army. A year later he assumed command of Central Command, where he fashioned and began implementing a strategy for rolling back the Islamic State militants in Iraq and Syria.

On Tuesday as he introduced members of his public health team, Biden vowed to distribute 100 million vaccines in his first 100 days and to make reopening schools a “national priority.” He again implored Americans to wear masks to slow the spread of the virus.

Biden’s health and human services secretary nominee, California Attorney General Xavier Becerra, will help oversee the government’s response to the pandemic, which has killed more than 283,000 in the United States.

Biden also plans to nominate Marcia Fudge, a Black congresswoman from Ohio, as his housing and urban development secretary, and Tom Vilsack, the former Iowa governor, as agriculture secretary, according to news reports. Vilsack held the same role during the Obama administration.

Biden is expected to introduce Austin at 2:30 p.m. EST Wednesday. NewsNation will livestream the event in the player above. 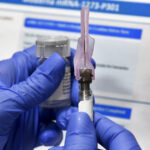 Next Story:
EXPLAINER: When and where? How COVID-19 vaccines will roll out in US