The modified Stay-at-Home order, announced by Gov. Cooper Tuesday afternoon, will limit hours of operation from 5 a.m. to 10 p.m. For Hook & Reel Cajun Seafood & Bar in Durham, that will cut their Friday and Saturday dining hours.

“Unfortunately, the time that we live in right now, we have to adapt to our surroundings, and this is one of the things we’re going to have to adapt to,” said operations manager Sean Day.

It comes after their grand opening was pushed back due to the pandemic.

“We were originally supposed to open up in April, but when this all came about we had to shut down shop with construction,” said Day of the restaurant, which eventually opened in August when COVID-19 metrics in the state were improving.

Even restaurants that won’t have their hours cut have noticed decreasing business as temperatures have dropped and safety concerns increased over more COVID-19 cases and hospitalizations.

“It has been dropped significantly. We typically get probably five to 10 tables today, versus it being super busy at lunchtime,” said Andy Lee, who owns PokeWorks in Durham.

Report: 10,000 restaurants expected to close in the next 3 weeks because of COVID-19

Lee said his goal is to simply break even in an effort to wait out a return to normalcy. For Wendy Woods, who owns GRUB Durham, Piper’s in the Park, and the NOSH chain of restaurants, it’s a worrying wait.

“We had a very good Thanksgiving with our family meals and pick-ups. But this past two weeks or week and a half have been really difficult, and it almost feels like we’re starting all over again with our situation with COVID. So it’s very scary. December and January are very scary,” said Woods.

Dealing with those limitations and concerns, restaurants are trying to better connect with customers, offering take-out and curbside pick-up with some purchasing heating lamps for their outdoor areas.

“We have been able to survive this long due to the fact that we offer a wide variety of options for the customer,” said Woods.

Despite the difficulties, restauranteurs are grateful for those that have made efforts to eat locally throughout the pandemic.

“We appreciate the support, and we will continue to encourage them to visit us as many times as possible. But with the students gone from the university, we do see the business drop quite a bit,” said Lee.

“I want to say thank you to our customers who have supported us over the years and have continued to support us during this difficult time. So I want to say thank you. I’m very concerned because the restaurants that are doing well are the ones that have drive-thru’s. We don’t have that ability. We’re an independent restaurant,” said Woods.

Day and his staff are looking forward to finally being able to operate in a non-pandemic environment.

“We know that when we come out of it, there’s big, big things for us to accomplish here. And I think we’ll do very well,” said Day.

Kingfisher co-owner Sean Umstead pivoted his bar business to burgers over the summer. As the winter temperatures roll in, business has become unstable.

“I think bars are consistently vilified,” said Umstead. “I think they are presented as an easy out and root cause of things even though I don’t think bars are inherently dangerous. I think a lot of bad actors make it unsafe.”

Owner of Casa Cubana and Red Monkey Randy Hernandez is confused by the new curfew. He says the restaurants have been operating safely with some sort of curfew and cases still went up, so why put more of a curfew in.

North Carolina bars and restaurants are trying to figure out a way forward amid a new curfew as COVID-19 cases rise throughout the state.

Hernandez set up tents in his parking lot for dancing and events.

“The restaurants and nightclubs right now, they’re just suffering with half capacity in the dining room but a lot of people are still afraid to come out,” said Hernandez. “You have to think outside the box. We’ve certainly done that. We’ve done events in the streets, we were doing salsa dancing in the street.” 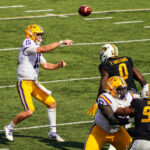 Next Story:
Notebook: Tre Williams ‘exploring opportunities outside of Missouri’