CLEVELAND — A major winter storm is heading towards the northeastern US that will bring 1 to 2 FEET of snow to portions of Pennsylvania and inland New England. While the bulk of the impacts will be east of us, we’ll still see some slippery travel and accumulating snow here in NE Ohio as we get clipped by this one.

As a result, Winter Weather Advisories have been issued for Carroll, Stark, Tuscarawas, and Trumbull counties beginning Wednesday morning.

It all begins Wednesday with snow showers developing from south to north during the midday and early afternoon hours. Snow will mainly be light to moderate and will be most concentrated south and east of a I-71/I-271 line. Snow will continue on and off for most of us through Wednesday night into early Thursday morning.

In terms of accumulation, we’ll likely see an inch or two at best from downtown Cleveland west towards Sandusky where we may not even see that. Amounts will increase as you move closer south and east towards the area of low pressure. 2-4 inches will be possible from Akron to Canton with higher amounts possible as you near the OH/PA state line.

Impacts will be minor from Cleveland to Mansfield and areas west with some slick roads possible for the evening rush hour. We could see some tricky travel Wednesday evening in our Winter Weather Advisory counties. Everything will come to an end by Thursday morning.

We’ll moderate our temps into the weekend and to start the next week. An early look at Christmas Eve and Christmas Day shows some type of storm system rolling through Ohio. As of now it looks like a rain changing to snow event Wednesday into early Christmas Eve Day before much colder air moves in Christmas Eve into Christmas Day

FRIDAY: Mostly cloudy skies and not as cold. Upper 30s.

SUNDAY: Cloudy with a slight chance of rain/snow early. Near 40.

MONDAY: A slight chance of a rain/snow mix. Low to mid 40s.

TUESDAY: A mix of clouds and sun. Lake flurries possible. Near 40. 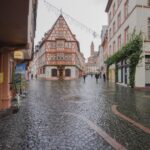