It was the worst thing I could see in my life’: Witness recounts crash that killed 5 cyclists

Five people were killed and three others injured after a box truck driving in the same direction as a group of about 10 cyclists veered into their lane, according to Nevada Highway Patrol. It happened Thursday morning around 9:30 a.m. Per Nevada law, a driver must give a bicyclist at least three feet when passing on any road whenever possible.

The group does this ride, called the Nipton Loop, every single year.

A man who was riding with the group says it got windy and next thing they knew is around 7 bicyclists were stuck between a car that assists the riders and the box truck involved.

Michael Anderson says trying to contact his friends’ families has been difficult.

“I have been a cop for 22 years. I just retired last month from Metro Police and I have seen stuff obviously as a police officer, public service, but when it is your friends, I have never seen that,” Anderson said. “I don’t even know, it was the worst thing I could see in my life. All those trying to contact the families and I don’t even know how to say it to them.”

According to the National Highway Traffic Safety Administration, there were 857 bicyclists killed in traffic crashes in the United States in 2018.

Friends mourn for bicyclists killed in horrific crash
“We’re just all numb. We’re processing it. It’s been tough,” said Shawn Tyrone, General Manager of Las Vegas Cyclery. Some of his friends and cycling buddies died in the crash.

In front of Las Vegas Cyclery, there is a Ghost Bike sculpture from 2018. Tyrone says he expects to see one at the site of Thursday’s crash, as the white bikes are usually placed where cyclists have died in car crashes.

“To raise awareness and just to remind everyone that, there’s not a text or a phone call or anything distraction-wise that’s worth somebody’s life,” Tyrone said. 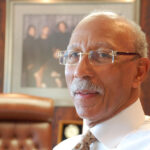