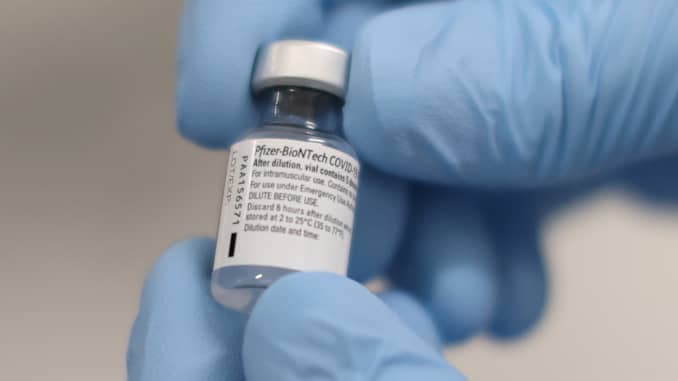 CHICAGO (NewsNation Now) — The vaccine developed by Pfizer and BioNTech is reportedly 95% effective at preventing COVID-19 and Thursday a committee of outside experts is scheduled to vote on whether the U.S. Food and Drug Administration should authorize its use.

“It’s effective in people under 55, [it’s also] effective in African-Americans, Hispanics, in Whites and Asians,” John Grabenstein with the Immunization Action Coalition said.

The panel called Vaccines and Related Biological Products Advisory Committee consists of independent external experts. The FDA released its review of the vaccine earlier this week, ahead of the Thursday meeting.

“These independent scientists will debate it, they’ll discuss it, they’ll see a lot of detail, and then they’ll vote,” Grabenstein added.

Some vaccine trial participants have complained of sore arms and minor aches and pains. Doctors in the U.K. report two vaccine recipients – who both suffer from severe allergies – had allergic reactions to the vaccine. British regulators are now advising those with severe allergic reactions to avoid being vaccinated. It’s not yet clear what caused the reactions and experts here in the U.S. predict this will be discussed at Thursday’s meeting, but claim it should not be a cause for major concern.

Dr. Jim Baker, the former CEO of the National Food Allergy Foundation said the reactions to the UK vaccine are not well-defined.

“They were in people who had allergic reactions before to many different things but not to this vaccine. I think the really valuable thing the British could do is look at these two cases and see what the real cause was,” Dr. Baker said.

US awaits vaccine approval as daily national deaths top 3,000
This is the fastest-developed vaccine in history, but doctors said it’s safe and the process of working toward emergency-use authorization has been methodical.

During an Operation Warp Speed meeting, U.S. Secretary of Health and Human Services Dr. Alex Azar said, “All of the statistical significance requirements for efficacy are the same that they would have been for a full license.”

“This vaccine is really the only way out of the pandemic. We’ve done social distancing we’ve done masks – and they help – but they haven’t stopped the deaths and the infections overall,” Dr. Baker added.

Depending upon how quickly the FDA acts, the first recipients could receive their shot within the next few days.

Helix Season 3 To Come Or Not?