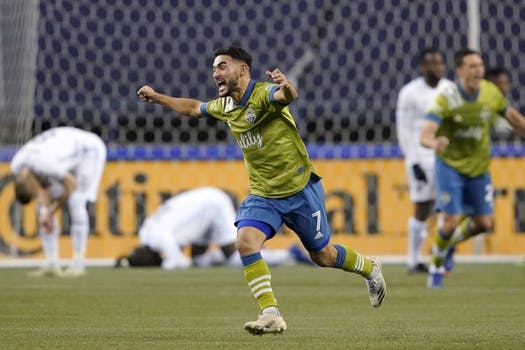 For all that happened in a pandemic season unlike any other he ever has or ever will play, Minnesota United midfielder Ethan Finlay won’t remember games postponed on a moment’s notice, a schedule restarted twice and too many nasal-swab tests to count.

“Unfortunately, I’ll remember the last 10 minutes of this game,” he said.

Leading 2-0 against the defending league champion Sounders until the 75th minute, the Loons allowed three goals in the final 18-plus minutes against an opponent that now will play in a MLS Cup final for the fourth time in five years.

Seattle will do so Saturday at Columbus.

Meanwhile, the Loons’ club-record, 10-game unbeaten streak and their season ended not long after Seattle midfielder Gustav Svensson scored his team’s final third and final goal. The Sounders scored in the 75th, 89th and stoppage time.

The Loons also lost starting right back Romain Metanire, who left the game in the first half with potentially a torn hamstring on what became their season’s final day.

Two of those three goals came off set pieces, including Svensson’s deflected header off a corner kick after striker Raul Ruidiaz scored the tying goal from the far post of a corner kick from the field’s other size just four minutes earlier.

“It’s a cruel game when you’re on the receiving end of it,” Loons coach Adrian Heath said. “It’s obviously a very distraught dressing room of upset players. Sometimes it’s best to say nothing. We’ll have a chat with the group. I’ll thank them for their efforts this year. It has been remarkable what they’ve given us through a really testing and trying season for everybody, but nobody more so than us I think.”

“I’m just sick to my stomach, obviously,” he said. “Everybody in that locker room is sick to their stomach. We fell short, obviously, this evening. There will be a lot of soul searching from a lot of individuals. It was a great year, but absolutely disappointing tonight.”

Two-time MLS Cup champions in the past four years, the Sounders won their 15th consecutive home playoff game dating to 2013 with a comeback for the ages. The Loons’ 2-0 lead that came off star attacking midfielder’s Emanuel Reynoso’s dominant left foot in the first 66 minutes vanished in those final, ticking minutes.

Afterward, Seattle coach Brian Schmetzer called Will Bruin’s reactive goal to a shot that bounced off Loons defender Michael Boxall’s backside the “spark” that changed everything.

When asked what he’ll tell his team in the locker room after such a comeback, Schmetzer said in a FS1 postgame interview, “I have no idea. They’re in there throwing champagne around. I know it’s going to be a mess, but we’ll clean it up.”

Finlay was on the verge of tears during a postgame Zoom interview with reporters.

“A lot of great things happened this season, don’t get me wrong,” he said. “But we play this game not for individual success or stats or even contracts. I play this game for trophies, championships. That’s our mentality. This is hugely disappointing. This is something we will think about and marinate on.”

He scored the game’s first goal — and his first MLS playoff goal — with a direct free kick from 35 yards away in the 29th that was bent beautifully past Sounders keeper Stefan Frei.

Until then, Reynoso had three assists in his first two postseason games, 10 assists overall in his last five games and one goal, which came in a 3-0 regular-season finale victory over FC Dallas.

He did it in the 66th minute again, this time sending the free kick from the left side toward goal. This time, French defender Bakaye Dibassy flicked-on a header that beat Frei, just four days after he scored in Thursday’s 3-0 victory at Sporting Kansas City with another header off another Reynoso kick.

It was also the 13th time in the Loons’ last 14 goals on which Reynoso either assisted or scored. After the game, Finlay said, “We might have the best player in MLS.”

Reynoso’s seven postseason assists — in just three games — are the most in MLS, one more than Columbus’ Guillermo Barros Schelotto’s six in four matches and Chicago’s Ante Razov’s six in seven matches in 2000.

Easy Upgrades You Can Make to Your Truck This Weekend

Commentary: Why Are So Few People Born on Christmas Day, New...