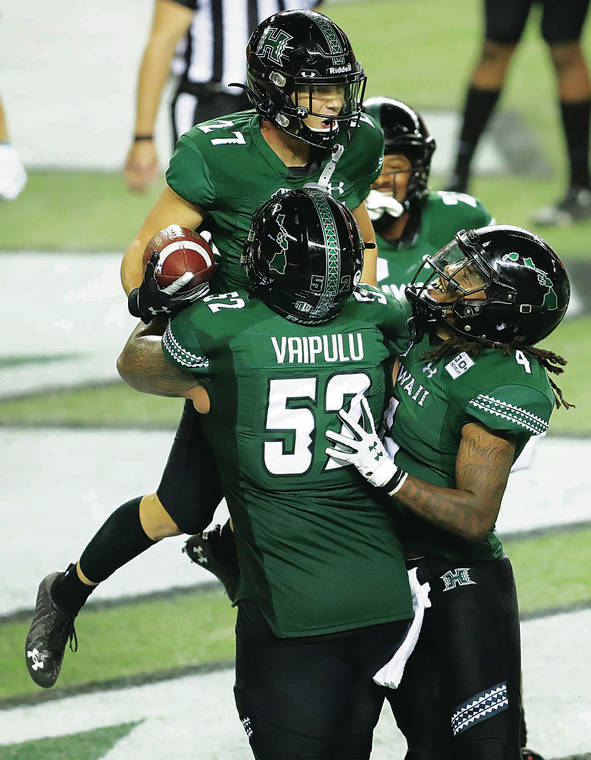 As the University of Hawaii football team assembled for the annual team photo Sunday, its members were asked to picture being in a bowl game.

That’s when athletic director David Matlin made the surprise announcement the Rainbow Warriors would play the other UH — the University of Houston — Dec. 24 in the New Mexico Bowl.

But in another one of those only-in-2020 scenarios, the game will actually be played in Frisco, Texas, a Dallas suburb 400 miles from the New Mexico border, due to COVID-19 restrictions in the bowl’s original home, Albuquerque, N.M.

First-year coach Todd Graham, who is from Mesquite, another Dallas suburb, liked the choice not only for homecoming purposes since his mother lives nearby, but for recruiting. UH has six players on its current roster from Texas, including freshman receiver Dayton Toney, who is from Frisco. Two others are from Oklahoma.

The seating capacity of Toyota Stadium is listed at 20,500 and is expected to have 20% capacity for the game, pending a final announcement, officials said. The facility is home to the soccer team FC Dallas and area high school games. The NCAA has held the past 10 FCS national championship games there.

The game is scheduled for 10:30 a.m. on ESPN, which owns and operates the bowl.

Although UH finished the regular season at 4-4 after beating Nevada-Las Vegas, 38-21 Saturday, and the Cougars were 3-4 in the American Athletic Conference, NCAA pandemic-era rules this year allow teams without a winning record to compete in the postseason.

With the cancellation of the Hawaii Bowl for 2020, Graham said he had originally believed the Warriors would need to win out in their final two games to secure a bowl berth.

Graham said with most bowls of this level, the goal for the athletic department is just to break even.

Under the terms of Graham’s contract, he would be eligible for a $40,000 bonus if UH wins a bowl game or $20,000 if it loses. Performance incentives for assistants may be as much as one-twelfth of their respective annual base salary upon the recommendation of the athletic director and approval of the Manoa chancellor, according to school policy.

The game marks the third consecutive trip to the postseason for the Warriors. Hawaii and Houston last met in the brawl-punctuated 2003 Hawaii Bowl, which the Warriors won, 54-48, in three overtimes at Aloha Stadium.